Squid is a caching proxy that can be used for a variety of purposes. Following on from an earlier post, this post is going to look at using Squid to intercept HTTP traffic on a wireless access point.

Squid is part of the standard Debian repositories and can be installed with apt-get:

Once squid is install, /etc/squid3/squid.conf needs to be updated. Start by allowing connections from the local network:

Then put the http port into intercept mode:

Once the configuration has been updated, restart Squid to pick up the changes, and enable the service to make sure it starts at boot:

The final step is to redirect inbound traffic on the wireless interface to Squid. This can be done with the following iptables rule:

Note: don't forget to run iptables-save if you want to make the rule persistent.

Once Squid is intercepting connections, it's possible to manipulate HTTP traffic. For example you could replace all JPG images with a cat: 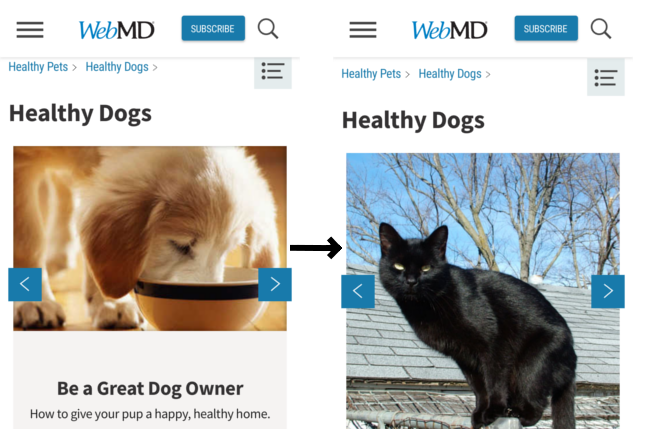 Cat photograph by and copyright © of DrL. This image is licensed under the Creative Commons Attribution-Share Alike 2.5 Generic license and can be found on Wikimedia Commons. The website being modified is http://pets.webmd.com.

The first thing to do is setup and configure Apache to serve a cat image. This can be done with the following commands:

Once Apache is up and running add the following configuration to /etc/squid3/squid.conf:

This will tell Squid to run more_cats.py which will allow us to manipulate HTTP requests. The more_cats.py script should look similar to the following:

Note: refer to the Squid documentation for more information on writing rewrite programs.

Finally Squid can be restarted and all files ending in .jpg will be replace with a cat as shown above:

Rewrite scripts are obviously very powerful and let you do a wide range of things to HTTP traffic. GitHub is a good place to look for inspiration.

The obvious way to prevent HTTP traffic being manipulated is end to end encryption. HTTPS is becoming far more common, and recently passed the half way mark:

Yesterday, for the first time, @Mozilla telemetry shows more than 50% of page loads were encrypted with HTTPS. - tweet from Let's Encrypt (@letsencrypt), 14 Oct 2016

If you don't already use it, I would highly recommend HTTPS Everywhere. Finally if you do manage a website, consider enabling HTTPS if you haven't already!