What are custom properties?

Prior to CSS custom properties, if you wanted to use a colour multiple times, you would explicitly duplicate the colour. For example:

This problem is slightly alleviated by properties being inherited, however large blocks of CSS could often become hard to maintain.

Custom properties allow CSS authors to use arbitrary properties with a -- prefix. These properties can then be referenced using the var function. For example the CSS above could be written as follows:

In the example above --accent-hue is used to control the --accent-color property, which is reference by declarations later on in the style sheet. Because the accent colour is controlled entirely by the custom property, it's easy to dynamically modify the accent colour hue with JavaScript similar to the following:

The screenshot below shows a demo page using JavaScript to do this: 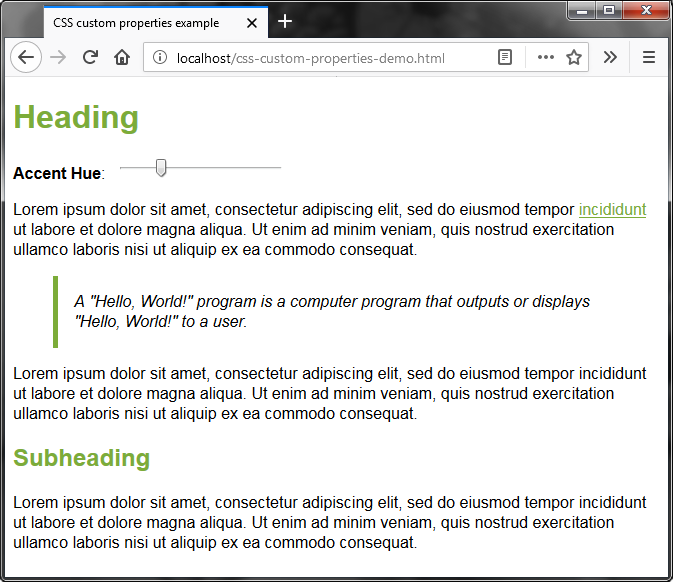 What about CSS preprocessors?

One key point to consider is variables used in custom processors cannot be referenced or modified by a browser after compilation. This means they cannot be dynamically modified by JavaScript or updated based on CSS media queries. Ultimately I suspect custom properties will be used along side preprocessors, however time will tell.

If you want to learn more about CSS custom properties I would recommend having a look at the following: